The Beast of Heidelberg 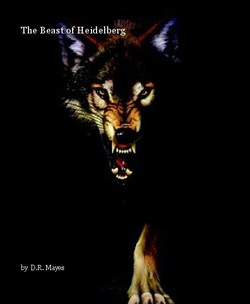 The crisp night air filled the lungs as it runs effortlessly across the moonlit meadows and deep valleys of the Appalachian Mountains. Every muscle in the magnificent body trembles with excitement as the hunt progresses and the anticipation of a fresh kill brings unbearable excitement. The smell of fear fills the acute nostrils with the sweet scent of a long forgotten glory and the hunt stops long enough to raise a primal howl that echoes through the surrounding mountains and reverberates into the valleys below where the cabin doors quickly close and the locks are set tight to keep out the terror that is, but tonight the blood would flow from its fangs and another creature would perish beneath the awesome power.

The blood pumps uncontrollably as the hapless victim comes into view still running for its life. The end is in site and the instincts of thousands of years forge the will as it pounces on the screaming creature. The warm blood gushes into its mouth as the sharp teeth sever the jugular, and the body beneath convulses as the life force drains away. It devours a small amount from the kill and does a body roll on the open flesh in celebration of life and the wonder of being alive and free. It drags the body to a giant Oak and covers the bleeding prize from any scavengers or those who would be foolish enough to challenge the supremacy. The fangs silhouette against a full moon as the head arches and the howl fills the region until the smell of a human rises up from the valley floor like a sickening stench. It fears no creature and the promise of confrontation fills the magnificent animal with a rage beyond reasoning as it slinks into the brush and waits. The thrill of chase is satisfied but a more demanding need takes its place, the lust to kill leaves it incapable of reason as the hunter comes into view.