Survivor    The Story of Annie 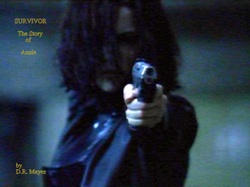 Sexual and physical abuse was no stranger to this girl. As a young child in numerous Foster Homes, that was the expected payment of any new residence she was placed. She escaped this Hell at eleven years old and disappeared into the seedy side of Philadelphia streets only to become enslaved to drugs. Her appetite for the momentary escape cost her dearly as she would use the only thing she possessed to acquire the next high, her body.

Beaten and abused to near death by a supposed street minister, she was dumped in an alley to die. As she teetered between the land of the living and the finality of death, the night darkness was illuminated by a heavenly being. He was sent by the Most High to take the young girl to safety in a remote region away from the drugs, sex, and degradation of her life.

With strict orders, the Angel trained her for many years in hand to hand combat, firearm supremacy, global and political history, and charged her with a heavenly directive and assigned a mission she must accomplish. She only recognized the Angel in human form, the man she knew only as James.

After many years of training the abused young girl was a faint memory from the past. The woman she became stands confident and deadly and carries a horrific secret. A secret she must complete out of gratitude for the man who saved her life and because of her undying love for him.

Now she walks the rugged Appalachia Mountains of Eastern Kentucky looking for the object of her mission. Demons are no match for her deadly skill and fall by the dozens. The Dark Angels remain well hidden in this vast region but soon the Killing Machine will track them down and their last terrorized breath will scream the name   “Annie!”